Home  /  Blog   /   SpaTools: Plot Points In Cad
Most of the total stations used in Surveying & Mapping industry, store the data in their native raw format. These raw format files may be binary or ASCII.
For example, Sokkia made total stations store the data in SDR33 file format natively.  SDR33 is an ASCII file having custom file headers and record types. Similarly, Leica total stations store the terrestrial observations in GSI file format as raw data. GSI is also a ASCII file format with custom record types and file headers. This will some other day’s story how the raw observations (Occupied Station, Back station, Bearings, Horizontal angles, vertical angles, slope distances, Height of Instrument, Target Height etc) are stored in such files. 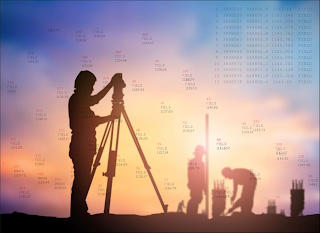 Some well known raw observation file formats are listed below:

All the proprietary software export reduced coordinate files into Comma delimited CSV files to further use in CAD and GIS software. The most common CSV file format contains five atomic units of the data in the following sequence:

Point Number, Easting, Northing, Elevation, Code
Point Number is a auto generated number starting from 1 with the increment of 1.
Easting, Northing and Elevation are the floating point numbers rounded off to 2 or 3 digits depending upon the export settings in total station or processing software.
Code is the alphanumeric code entered by the surveyor during observation.
A snapshot of a CSV file contents is shown below. 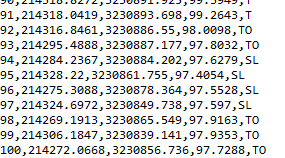 The CSV is plotted in the form of Points, Blocks or Circle objects in CAD using different software such as AutoCAD Civil 3D, Eagle Point, ArcGIS etc.  One of the style to plot points in  CAD is in the form of block with 3D point having three attributes(Point ID , Elevation and Code) as shown below: 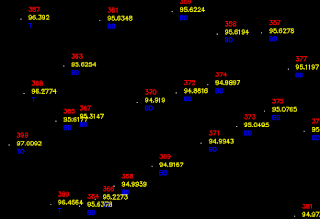 In August 2016, I developed a cloud based online tool which plot the points in the form of point blocks with attributes.  In the continuation of SpaTools, I have developed a tool which plots a CSV file into AutoCAD in the form of the point blocks with Point ID, Elevation and Code attributes. The command can be executed by typing PPIC on command prompt as depicted below:

After loading CSV file, all the point records will be displayed on the dialogue box. If the CSV file has a first row as header, check the First Row is Header Of Columns checkbox. If the data rows are starting from the first row of file, then there is no need to check that checkbox. The list of the coordinates will display the column headers as Field1, Field2 and son on.

Select the column containing Easting or X from the list for X Field, Northing or Y for Y Field and Elevation or Z for Z Field.
If the points are desired to be plotted as Point objects (Not the Blocks with attributes) then keep uncheck the Plot Points as Blocks checkbox.
Click on OK button to get all points plotted in AutoCAD current drawing.

The updated SpaTools.DLL can be downloaded from the following link.