Buffer analysis is a common tool of spatial analysis, which deals with the problem of proximity Buffer analysis can make the complicated problem be more scientifically and visually, and provide valuable information for users. The basic idea is to create a zonal area of a certain distance around its boundary. This zonal area is technically called as buffer.

These buffers are used to identify the impact range and service range to surrounding environment. The process involves generating a buffer around existing geographic features and then identifying or selecting features based on whether they fall inside or outside the boundary of the buffer. 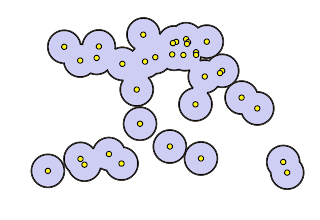 Usually, CAD users create circles manually around points or create offsets along polylines and join/merge those objects manually to generate buffers. In order to automate this process, I have developed a tool to create and merge buffers along the points efficiently. The tool is now included as “Create Buffer Around Points” as part of SpaTools toolbar.

Click on “Create Buffer Around Points” to execute the command.

The buffer distance is the primary input which can be entered on the command prompt. The distance should be a non-zero positive number. The second input to the command is to select Yes or No to merge the objects. If Nois selected, it will draw the circles around the selected point objects and will not merge those circles as depicted below:

If Yesis selected, it will merge all the circles. The overlapping circles will be merged together as Polyline object.

The DLL can be downloaded from the link given at the bottom of the blog.

Read the installation instructions from this blog.