In the continuation of my last post about buffer around points, I have developed another tool to create buffer polygons around/along the linear AutoCAD objects such as Polylines and Splines. Buffer  is one of the vital tool of Spatial Analysis and it is often needed to create buffers along the linear features such as roads, canals, railway lines etc. 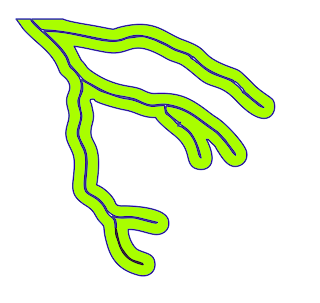 To create buffer along a polyline manually is not a One Click operation in AutoCAD rather following operations are needed to create buffer polygons along a single polyline:

In case, if there are hundreds of the polylines, this operation becomes hectic. Though, merge polygons tool can be used to merge the polylines, but still it is time consuming and inefficient method.

In order to automate the process of creation of buffer polygon along linear features, “Create Buffer Around Polylines/Splines” is developed and now added to SpaTools toolbar ribbon.

Click on “Create Buffer Around Polylines / Splines” to execute the command.

The buffer distance is the primary input which can be entered on the command prompt. The distance should be a non-zero positive number. The second input to the command is to select Yes or No to merge the objects. If No is selected, it will draw the buffer polygons around the selected Polyline or Spline objects and will not merge individual buffer polygons as depicted below:

The DLL can be downloaded from the link given below:
Read the installation instructions from this blog.